of mirrors, mermaids, the past and the future

Last night I caught some of Neil Oliver's BBC2 programme on the Celts. I was struck by his mention of the grave of a woman from I think the C3rd BCE. The excavations showed that she was a woman of note from the Iron Age; buried, extremely unusually, with her chariot and chariot fittings. Near her lay what seemed to be a mirror. Neil told us, however, that this was not a mirror in the sense of a looking glass for vanity, but rather – my paraphrase – a medium for scrying: in other words, a tool for peering into the past in order to communicate with ancestors.
Scrying is a magical practice that allows one to slip time. It's usually undertaken in a trance state – indeed the act of scrying can induce trance – and the medium used is usually reflective, translucent or luminescent. Often clear crystal balls were/are used; sometimes smoky quartz, or obsidian; glass, water, fire or smoke are all also common media. (You will probably know yourself how easy it is to slip into a semi-tranced state simply by gazing at fire, or at a body of water.)
In 2009[update] the Ganzfeld Exeriment, a form of sensory deprivation experiment inspired by scrying, provides the best known evidence for 'psi' abilities in the laboratory.
The visions that appear to arise with scrying may be initially prompted by variations or gentle and sometimes rhythmic movements in the medium. 'If the medium is water', says Wikipedia, 'then the visions may come from the colour, ebb and flow, or ripples produced by pebbles dropped in a pool. If the medium is a crystal ball, the visions may come from the tiny inclusions, web-like faults, or the cloudy glow within the ball under low light (e.g., candlelight).'
What I assume happens is that, as with writing 'in the zone', one's conscious mind is engaged with the sensory experience and one's imagination is freed into the sub- or superconscious and is able then to travel beyond the limits of perception dictated by normal waking consciousness. Whether one then accesses what Jung called the collective unconscious, or what some New Age thinking calls the Akashic Records, and/or whether one simply slips the consensual notions of linear time, what seems to happen is that one taps into what we might ordinarily call the intuition via the imagination. In this frame of consciousness one naturally 'thinks' associatively and connectively.
Wikipedia says: 'One method of scrying using a crystal ball involves a self-induced trance. Initially, the medium serves as a focus for the attention, removing unwanted thoughts from the mind in the same way as a mantra. Once this stage is achieved, the scryer begins a free association with the perceived images suggested... This process culminates in the achievement of a final and desired end stage in which rich visual images and dramatic stories seem to be projected within the medium itself, or directly within the mind's eye of the scryer, something like an inner movie. This process reputedly allows the scryer to "see" relevant events or images within the chosen medium.'
One of the most famous scryers in history lived in the 16th century and was known as Nostradamus. He used a bowl of water or a 'magic mirror' to 'see' the future while in trance. Famously, Elizabethan alchemist John Dee had his scryer (whose name I can't currently remember); and there were many others in mediaeval England. 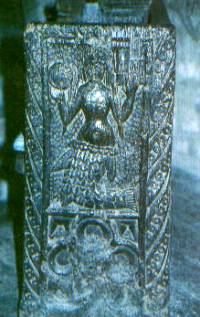 This set me thinking about the famous carving (many hundreds of years old) of the Mermaid of Zennor in the seafarers' church of St Senara in West Cornwall. She is portrayed with what have been described as symbols of her vanity: a mirror and a comb. Even as a young girl I knew this was wrong, but it took me many years to find alternative explanations. Mermaids are a symbol of the soul, of the feeling nature, and also a variant on Aphrodite, goddess of love. So I discovered much later that the 'mirror and comb' might actually represent the moon – of course also symbolic of the feeling nature and the feminine principle – and the zither or lyre, beloved of the gods. Others have suggested that the 'mirror' was actually a quince – the love apple, again associated with the goddess of love.
Robert Graves in The White Goddess, an utterly iconic book on prehistory, mythology, poetry, the Bardic mysteries and druidry, has this to say about mermaids: 'A familiar disguise of ... Marian (Robin Hood's Maid Marian) is the merrymaid, as 'mermaid' was once written. The conventional figure of the mermaid – a beautiful woman with a round mirror, a golden comb and a fish-tail – expresses "The love-goddess rises from the sea"... The round mirror, to match the comb, may be some bygone artist's mistaken substitute for the quince, which Marian always held in her hand as a love-gift; but the mirror did also form part of the sacred furniture of the Mysteries, and probably stood for "know thyself". The comb was originally a plectrum for plucking lyre-strings. The Greeks called her Aphrodite ("risen from sea-foam")...'
And more, some time, about all this.
Posted by roselle at 21:24


For several decades now I've designed and led courses that bring together creativity, attention to our inner world as well as anima mundi, and a deepening of our relationships with the rest of the natural world through outdoor experience, poetry, story and myth. My courses and writings reflect all this.

Over the last few years I've experienced a high level of plagiarism from one particular author, and apart from being both illegal and an infringement of my rights it has affected my ability to make a living, difficult enough in this field even after 29 years. You will understand that I'm now sensitive to it; and it is one reason why my blogposts over the intervening time have been scarcer and less substantial in content.