Not the real hornets' nest
Here in the lush and temperate southwest of England even we are seeing the results of more extreme weather. By the stream the willows are yellowing, despite torrential rain coming on the heels of much sun. The hazelnuts are already fat and sturdy; foxgloves dropping blossom; and the Michaelmas daisies associated with the end of summer are in flower too. Still so few swallows around; and only a couple of hornets, where last year we had a large number emerging from the intricate architecture of their nest on a huge old oak across the valley, flying to feed on blackfly on the willow outside my study door.

The mangetout peas are prolific, and at last the sweetcorn is flowering and broad beans nearly ready, though our climbing beans and courgettes are not thriving.

My challenge here is to keep what I want to write about brief, not to say succinct. (Ha!) I've some poetry assignments to respond to, and as always more emails and promotional stuff for courses than I can stay on top of. And it's Ways With Words literary festival this week – apart from reading myself on Thursday, there are events I'm attending too.

Here I want to follow on from my June post on the compass of the heart, and also from Monday's Part 1, where I spoke of ego and our so-called 'civilised' attitudes that marginalise the wild.

*
The wild and the west
That wonderful book I mentioned in June: Jim Perrin's West – a journey through the landscapes of loss has become one of the books I can't bear to finish, so I've been rationing it. It's a book about wild, and wild living (that is living close to the natural world rather than having one's life dictated by societal norms); it's a book about love and loss, it's a book about philosophy, natural history, climbing, poetry and an inner journey. It's hugely erudite, resonant and enormously inspiring. It's also exquisitely written; it out-poets poets' writing without being self-conscious. I want to copy out whole chunks, or the whole book, and share them/it with everyone!

But since I can't, I'm going to restrict myself here to picking up the theme of west, by copying out bits of a longer passage (until this two-finger typist who should be doing other work tires of it/or I'm getting to the stage where I'm breaching copyright!).

On the medicine wheel of various shamanic traditions, including the native British, west is the direction of water and the feeling nature; dissolution and dispersal, dreaming, death and letting go.

Here's Perrin: 'A tenet of Celtic Christianity – the branch religion Augustine was concerned to eliminate – is that to follow sunwise, westwards, is to take some steps towards the wisdom the access to which is through a loss or abnegation of power; is to apprehend the metaphor implicit both in the sun's slantwise celebration and enlargement of the natural world (think how small the hills become at high-summer noon, how they rear in the evening light), and in the greater beauty at its setting than at its zenith. Reflective fragments of history and culture still attach to these furthermost places of an old land: Scotland and the Western Isles, the West of Ireland, Cornwall, Wales... The structures, contexts and perceived necessities of our 'western' society, its insistence on straight thinking and dismissal of the crooked path of the sage, have marginalized the unsupported living in these places more than ever before...

'I watch the walkers on the coastal paths of the west, and catch at the sense emanating from them of something unstated, unconscious, drawing them there, aspiring in true pilgrim fashion after Grace. If the land inspires in us the capacity to love, then love has entered our souls, and we are connected in The One. And connected too in the loveliest places with the echo of moments in locations where humane values have flourished, and may flourish still, as they do not flourish throughout much of our soft-totalitarian state, with its subservience to capital, its desperate need to control and restrict and own and possess, its posturing inauthenticities, its addiction to empty and gratuitous sensation, its rabid underbelly, its abject squeaking fear of difference...

'So I make an effort to give definition to the idea that West, like East, is not only place but also distinctive and therapeutic state of mind – a letting-go, a coming-to-terms with the wilderness within, a celebration of the beauty of wild nature without which spaciousness and annihilating glory our lives are the more savage. Our society's multi-dimensional failure is in the turning to security, the reliance on currency you can grasp and hoard. That gilded wave-crest, those flung diamonds, the squeal and chatter of mating choughs – inexpressible riches! – what vault would hold them, and what could they buy?... This moment... is all the life we have, and it is for the living.'

Perrin's book is a coming-to-terms, expressly, with the suicide of his son, and the death of his lover, within months of each other. He also tells us in passing that he himself has had a diagnosis of cancer; but there is no self-pity in this book; just a sense of authenticity, great love, questioning, deep sorrow and celebration.

And the hornets' nest... nothing to do with either the literal one, or Stieg Larsson's book, but a literary one.

I have a very strong sense of fairness and justice, and cannot always shut up where others might have the wisdom to do so. Amazon has or has had a couple of 'reviews' of this book that are negative to the point of vindictiveness. [Just checked: some of the original reviews have been removed, leaving one or two more-or-less innocuously unfavourable ones.] The reviewers, family members of Perrin's lover, were, let's say, very strong in their condemnation of the book and Perrin's motivations.

Clearly I can't know what really went on in the heart of this man's relationship; there are always two sides to any story. But it is an upfront story that discloses a great deal. Given the two 'artistic temperaments' that come across in the book it was no doubt a volatile relationship. He admits, too, that memory is unreliable. And I should imagine some of the disclosures might be extremely uncomfortable for someone close to read. However the comments posted were/are so negative something in me kicked against this kicking of a man who was so obviously deeply in love with his partner, and who has lost both her and his son so close together, and is himself facing cancer; and there were attacks made publicly that amounted to a smear campaign.

I have no doubt that the people concerned have their own valid reasons and are also feeling a huge loss; they will also know things that I don't know about the relationship and situation. I just felt that something more balanced might have served their cause better.

So I wrote a comment to counterbalance that; in no way attacking or aggressive. This drew a response that was sufficiently unpleasant (and paranoid) to both myself and Perrin that Amazon removed it; but before they did I responded, again as carefully as I could.

I was tracked down and telephoned by one of the people concerned. She was pleasant and courteous enough, and very very insistent that I hear her case and take her side. She also asked whether it was I who had removed the Amazon posts, or been 'manipulated by Perrin to do so – he's manipulating the internet'. (The denigrating response has also, unless they've changed their minds and removed it, been posted on their own blog.)

Coming on top, as it did, of a personal and professional shock to me in an unrelated realm last week, and news of a death this week, I have to say I could have done without all that really; nonetheless I'd do it again.
Posted by roselle at 13:53

the journey is home

A constant stream running under my conscious thoughts is my preoccupation with the notion of pilgrimage: what it means in our 21st centu... 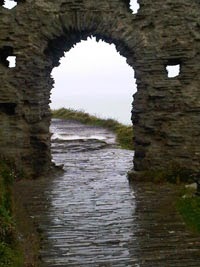 This of course is plagiarism, and apart from being both illegal and an infringement of my rights it has affected my ability to make a living, difficult enough in this field even after 29 years. You will understand that I'm now sensitive to it.