tomb with a view

For years now, driving through Finistère, I’ve been meaning to turn off at the sign a few miles south of Roscoff, a hand-stencilled ‘DOLMEN’ sign; a dolmen I don’t know. Or didn’t, until today. Usually I’m either going for the ferry with no spare time, or disembarking from a night crossing and not inclined to stop.

But today is a beautiful day; I’ve spent 3 days working hard on the house and the garden in – mostly – sun, and I’ve finished pruning and cleaned up early.

So in this blue-glass day I turn right down a narrow bumpy lane towards the Penzé estuary which debouches into the Baie de Morlaix between St Pol de Léon and Roscoff. To my left are ripe artichokes, following a field of pretty purple-blue flowers with tansy-like foliage, flowers that I don’t recognise, possibly being grown as a herbal crop. To my right is a field of newly-planted artichokes and some huge brassica plants.

Now I pass a fat crop of fennel. All this is in late October. The land here is lush and productive. Last time we drove this way – end of September – we passed a field bursting with little flame-red ‘potimarron’ squash, exquisite against the rich dark soil. I’ve grown potimarron successfully in Devon – an abundant crop with smallish fruit just the right size for two. We also grow delicate crisp mild Keravel Pink onions that originate just about right here, between the Penzé river and Roscoff.

To my left now, maybe just 50 metres down the lane from the main road, is a massive pile of stones and boulders, all a-jumble. I suspect (and the signboard for the dolmen confirms the possibility) that this heap was once part of a major megalithic complex, long since plundered and dug up.

And there on the right is my dolmen: Kerangouez. It’s smaller and much less dramatic than, say, Maugan-Bihan of which there's a photo in the previous (linked) blog; basically 4 or 5 uprights and a couple of capstones with parts, like the one-time 5 metre-long sepulchral chamber built at right angles to the entrance chamber, missing, and the seaward side claimed by brambles. Dating from the Neolithic, it will have been built between 5000 and 2000 BCE. 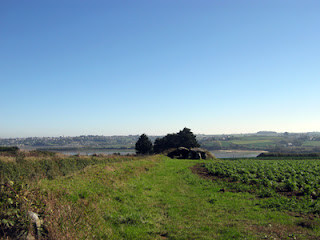 So this one is a last lost remnant. 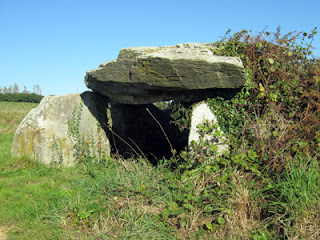 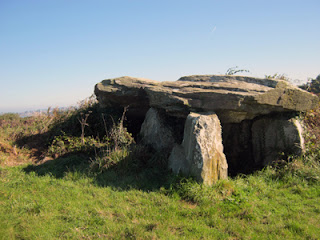 Brittany is full of megaliths; one of the reasons I choose to spend time here. Ancestral lines (there have been links between my homeland of Cornwall, and Devon where I've lived much of my life, and Brittany for millennia) are visible here; the past walks with us.

This one in its solitary unkempt fragmentedness was still worth the visit, situated as it is with a great view one way of the channels and white sandbars of the mouth of the river, and maybe 90 degrees to the north the beautiful Baie de Morlaix, today, as so often, exquisitely blown-glass translucent blue-green (Brythonic Cornish has a word for the colour of the sea: glaz. I imagine the Breton is similar.)

So the inmates of the funerary part would have had quite a view.   Despite the traffic behind me probably only 75 metres away, I can hear oystercatchers down on the shoreline several hundred metres below.

At my feet are tiny bright flowers – sheeps’ bit scabious and a small cranesbill, and ahead the ocean stretching smooth as a sarong off towards Great Britain.

Megaliths mostly convey a sense of tranquility: their slow durability catching hold of our accelerated lives. You can step out of time at such places, and for an unmappable moment my world stops turning too.

I don't quite know how it happened but it appears my blog site has been colonised by background foliage. What do you think? To keep or to lose?

Posted by roselle at 08:07 No comments: Links to this post

Like calls to like, and the Salmon of Wisdom leaps from her saltwater home to her freshwater home, and then into air. Over and over she leaps the falls, bruised, battered, bleeding, until finally she is there – the Sacred Pool at the heart of the world, the Sacred Pool of the Secrets, the Sacred Pool where she was born.

Home. Water to water to air to water.

Celts know Salmon as the oldest being. Salmon lives now in the Sacred Pool, eating the nuts of inspiration from the nine hazel trees, the poets' trees. Salmon is wise; knows how to live in three worlds, knows when it's time to return. Salmon now is charged with keeping counsel for those who are ready to seek it out, who are ready to give away their old life for the sake of the new.

Those who approach Salmon at the right time in the right manner will be given the ability to see through the veils between this world and the other.

Those, on the other hand, who arrive too young, too unformed, or who have hungered for the wrong thing or grown fat on that which belongs to others will not make it up the falls; not this time. Or if they do, they will find their fingers burned – so close, so far away; the itch of the search for wisdom never quite assuaged.

The woman has been travelling a long time. All her life, in fact. All her life she has struggled against the current, feeling in her blood the pull of the Sacred Pool. Her long skirts are ripped, her hair dishevelled, her feet torn and muddy. She is alone, apart from the old grey mare with whom she has travelled so far.

She no longer cares about about false friends, false promises. She does not care. What she cares about is the pull of the Well, the Sacred Pool. She knows the songs of the birds, she can speak with trees and plants and animals. She knows how the planets move and the way the tide sings just so on the shore.

And she knows what it is to be loved; deeply loved. More, she knows how to love; and the cost of an open heart. She knows this is all.

She is no one's servant, though she will serve the true of heart. The pony mare is her sister; the morning mist her friend; dusk a cloak she can wrap around her. Rain does not trouble her, nor hunger of the ordinary sort.

Like calls to like, and she can be true to the calling, only to the calling, which means she is true to herself, to everything and nothing. In her freedom she can smile into everybody's eyes, through to their core.

Salmon has been waiting all winter, feasting on the fat of the hazel nuts. Visitors are few.

The woman kneels in the rushes and mud at the edge of the pond. A breeze whispers in the willows. The woman maybe sheds one tear. It's been a long hard journey. She can barely breathe for the shock and joy of arriving here at the heart of the world.

Salmon swims slowly over. She is huge, magnificent, a queen of all waters.

The woman kneels, asks permission of the waters' guardian to be here.

Salmon disgorges a nut, soaked in inspiration: Awen, the eternal fire in the head.

The woman lifts the nut from the water, holds it as if it were gold, gazes into Salmon's eyes.

In that moment she learns what will finally change her life: there is a current beneath the current; a reverse current that will always take her, without struggle, to where she needs to be. All she need do is nose it out. All she need do is surrender, relinquish control. Water will find her, take her.

Then she will have brought her life into balance: the perfect tension between the path of least resistance and the path of the will; the path that will take her beyond need, beyond striving, to the heart at the heart of it all, which is Love.

NB: The insight about the reverse current is thanks to Philip & Stephanie Carr-Gomm

Poetry is a deep current that flows beneath my whole life, enriching and informing all that I do. And it also surfaces in cycles. Poetry is ...

THE WILD WAYS
ecopsychology/ecosoul courses & retreats:
http://thewildways.co.uk
In the 1970s I studied Celtic and early mediaeval French myths and legends in their original languages at Cambridge. In the 1980s I began a counselling training in Transpersonal Psychology, with an emphasis on the psychology of myth. From this grew my first workshops in 1991: 'Myth as Metaphor', out of which was commissioned my first book. Riding the Dragon – myth & the inner journey was published by Element Books in 1994.

This of course is plagiarism, and apart from being both illegal and an infringement of my rights it has affected my ability to make a living, difficult enough in this field even after 28 years. You will understand that I'm now sensitive to it.