Well, here I am back in soft and hazygrey Devon – and I think my cursor may be a little rusty.

Sitting here I can see through my loft window now at late dusk the August full moon rising over the hill, and the sky washed those rather indescribable shades of translucent harebell and mallow. The little smoke of bats has begun to drift past the window. 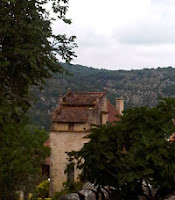 It took me about two minutes in France to work out that I'd need to abandon all my ideas of blogging by blackberry – the keys are so small that even a very short post (for which I am not noted) would be frustratingly time-consuming. So I turned my attention to having a break from things electronic. Instead I spent uncountable hours on the terrace of a 14th century house in a tiny hilltop village above the woods, lush plains and wide slow loops of the River Lot – that is in between the pools of conversation over the long lunches and dinners, and punctuating the writing, reading, walking, kayaking, river-swimming and visiting, again, the immensely inspiring painted prehistoric caves of Pech Merle, about which I've written before.

Before I abandoned the attempt, though, and before the urge to turn my pen to matters poetic had kicked in irresistibly, I'd made some notes; which as a way back in to my blogging self I copy for you here. 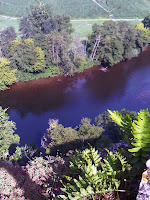 The last few miles are alongside the river. Embedded in the tall cliffs bordering the Lot are buildings dating from the Hundred Years War between England and France that straddled (my history's a little shaky) the C14th. We cross a small bridge and turn right, start winding uphill.

Dusk and we pull up on the tiniest of narrow slopes opposite a tumbling and many-pieced roof, all eight centuries of it (I'm excited to realise it would have been built not long after the period I write about in Imago, after the persecution of the Cathars and the fall of Montsegur. I'm also excited, later, to find indoors a book on the Cathars I haven't yet read).

The pan-tiles are old deep red terracotta, now dulled and darkened by age and dusk, and skirted with the last of the day's whirring house martins with a couple of dragonflies buzzing among them like officious guards (if that's not tautology). As we emerge the martins are gradually replaced by bats, and an owl begins to hoot in the thick oak and chestnut woodland – and listen, the green woodpecker's still yaffling off in the distance...

Tiny wooden gate. Step through onto the thick-stemmed-wisteria-topped oak-beamed terrace and oh the view of the wide slow river glinting below winding between the limestone gorges and lean over the terrace to catch a dusky glimpse of the lush river valley and its borders of woodland. A green pooling of daylight seems to linger below. This land is described as a 'pays de lumiere', and even at dusk everything seems to glow.

I'm here with my daughter and two much-loved friends who have treated us both to a holiday. This area is the national park of the Causses du Quercy in the Lot ('quercy' coming from the Latin quercus, meaning oak; it's very lush, very green and wooded – mostly oak and chestnut, with the fertile river borders thick with sunflowers, maize, tobacco and fruit and nut trees, and a huge number of colourful wildflower meadows; and right now very hot).

The Lot is a treasure: further south, rural, relatively undiscovered, almost completely unspoilt and in my view more beautiful than its better-known neighbour the Dordogne. Almost all the little houses – quirky, varied and tumbling over each other in a way that reminds me of the little fishing villages in my native Cornwall – in this small hilltop village are mediaeval, and even the few new ones are built of the local golden limestone topped with red tiles.

The family names here, often Occitan rather than French, have been associated with this land for centuries. Who knows how many of the inhabitants are descended from the people who painted the underground rock walls in this region with such sophistication so many millennia ago? Imagine the miles and miles of caves in the gorges; picture the prehistoric art created 25,000 years ago in the cavernous bellies of these hills: flickering silhouettes of horses, bison, mammoths, antelope, bear and auroch drawn in assured sweeps of red and yellow ochre, manganese and charcoal two miles below the surface. Picture the red ochre and charcoal 'negative' handprints, clear as your own. See the footprints of those two adolescent boys preserved in mud...

http://www.pechmerle.com/index.html
I rest my arms on the balcony and breathe in the oleander and thyme from the secluded little garden. I can hear nothing except the owl and an occasional cicada; the dogbark and tractor have both been switched off. A light in the faraway castle comes on. The river gleams up at me. The ochre walls are radiating the day's sun. We've a huge basket of ceps from the mushroom market to cook for supper. In a minute I'll go and chop garlic, begin an omelet. I think this and then Francis comes out with a glass of wine for me. 'I'm making a cep omelet,' he announces.
I breathe down at the river in the darkness. Think about nothing other than being here, than the gleam of water, the bats, the warmth of the old oak balcony.
And for a few blissful days even the Middle East, the London riots, the American debt crisis and, closer to home, the five young calves belonging to a negligent farmer whose welfare (or otherwise) has occupied a great deal of my waking time and what ought to be sleeping time also until finally the RSPCA took it seriously don't even approach my consciousness.

COPYRIGHT PLUS
Over the last few years I've experienced a high level of plagiarism from one particular author, and apart from being both illegal and an infringement of my rights it has affected my ability to make a living, difficult enough in this field even after 29 years. You will understand that I'm now sensitive to it; and it is one reason why my blogposts over the intervening time have been scarcer and less substantial in content.